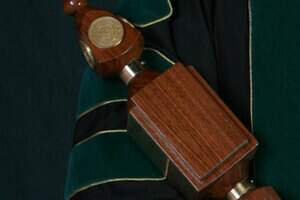 A symbol which goes back almost to the creation of institutions, the mace initially belonged to the military, where its function was to bash open the armor of the enemy. After the Christian conversion, the mace was changed by the church from a weapon of war to a symbol of peace. Bishops who accompanied the King’s forces into battle carried the mace instead of the sword because it was not capable of shedding blood. The mace identified the bishop as a nonparticipant or man of peace. Later, both the civil and university officials adopted the mace as a symbol of authority, once incorporating all of the military power, as well as the heavenly power of the church.

Today it is a symbol of the president’s authority to carry out the mission of Northeastern State University. It is a symbolic reminder that NSU’s pursuit of truth is both powerful and sacred. It represents learning not enforced by power of the military or coerced by the threat of clerical inquisition; rather, it incorporates the concepts of teaching and learning within the forum of freedom. Designed by members of this institution, Northeastern’s mace is of traditional European design and made of walnut wood. It is 42 inches long and is turned to create a tapered cylindrical staff similar to a medieval war club. The staff is turned gradually from the base to approximately six inches from the end where it transitions to a square with brass plaques on each side. At the top edge of the square portion, the staff is again turned to a point at which a brass spike is fitted. 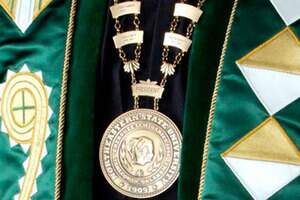 The 3 1/2-inch solid bronze medallion was created from the university seal to symbolize the rights, responsibilities, and privileges of his leadership position at Northeastern State University. Designed by Medallic Art Company of Dayton, Nevada, it has become an enduring symbol of those who have led the institution since our founding as a state school in 1909, and those leaders yet to come. The medallion hangs from a bronze chain distinguished by six 1 1/2-inch university seals that repeat on either side. They are placed in between banners upon which the names of the current and past presidents are engraved.

The university seal, designed by Eugene Starr in 1947, honors the growth of Northeastern from the days of the original Cherokee National Female Seminary. The medallion features the seal in bronze relief. At the center, a Native American is depicted in profile, flanked on either side by seven sheaves of wheat, representing the seven clans of the Cherokee Nation. Encircling the design are the words “Cherokee Seminaries 1846 Tahlequah Oklahoma,” a tribute to the university’s origins as an institution of learning
established by the Cherokee Nation. Separated by a narrow circle of rope, the outer row of text reads, “Northeastern State University 1909,” signifying the year that the state of Oklahoma purchased the Female Seminary to create Northeastern State Normal School. The outer circle reprises the fluted rope design in a symbol of strength that characterizes the university's legacy of commitment to education.