Named after Isabel "Belle" Cobb, an 1879 graduate of the Cherokee National Female Seminary, Cobb Hall is the second building on campus named after a woman. Belle returned to the Female Seminary to teach in 1882 and today is recognized as the first woman physician in Indian Territory. Opening for residents for the first time in the Fall of 2016, Cobb Hall consists of 4 floors of freshmen and upper class residents living in semi-suite style rooms.

The semi-suites are designed with a common bathroom, shower and two sinks/vanities that are shared between two semi-private (two roommates) bedrooms. There are limited private rooms available to upper class students. Each floor has its own lobby space with tables and lounge chairs as well as a private lounge room to be used for small programs or as a private study area. The main floor of the building includes a large laundry room, amply lobby space and a multi-purpose room with a community kitchen.

Back Entrance of Cobb, from Wyly Hall

Close up of Front entrance 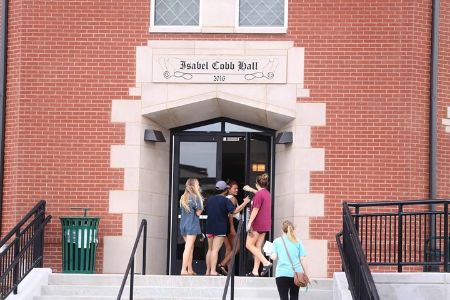